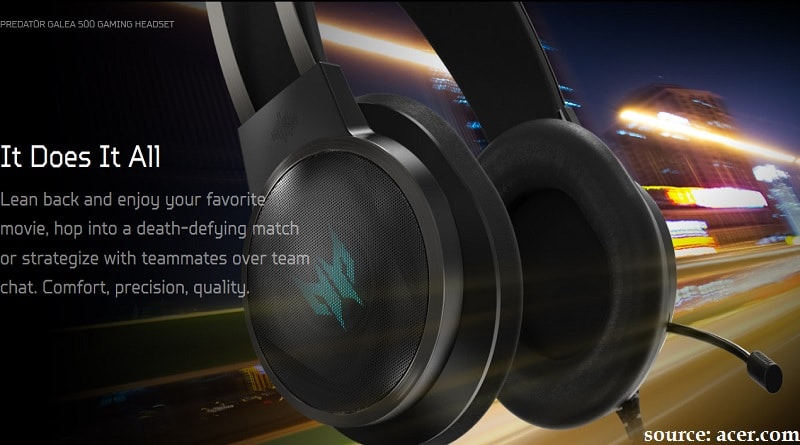 If you want to experience audio which is truly sensational and gives an unmatched sound quality, then Acer Predator Galea 500 is a good choice. It is a gaming headset. It is highly comfortable, but there are some things which make this headset a bit odd. Even though it is well structured, and has a decent quality of sound, it is very expensive. Along with its high price, it has a very inexact and loose fit. The thing that makes it different from its competitors is that it has a distinctive and unique 3D sound. Along with this, it has very pleasing aesthetics.

There is no doubt in saying that Acer Predator Galea 500 has a very attractive look. It is black, and it has a metal design, which gives it a very elegant look. It also has a strap of faux-leather below the metal band, which attaches it to the cans. The earpads of Acer Predator Galea 500 are created from the same kind of material. And because of this, it makes the headset more comforting and soft. It also has a very elastic nature, which makes it quite a loose fit. So, if you are a fan of headsets which give a tight-fitting, then it might be a disappointment to you. The thing that attracts the consumer the most is its civilized and illuminated logo of the Predator, which you will find on both sides of the headset. It’s teal color provides a very aesthetic look. You can get a great discount on electronic devices online using Amazon Coupons.

Many people wanted it to be a wireless headset, keeping in mind its high price. But it’s not a wireless headset, rather it uses a USB through a nylon cable, which is a lot durable. In the mid of the nylon cable, you will find a controller, which has a big button, which is blue. This blue button switches between the audio setting of Waves Nx 3D, and settings of three equalizers, that is, for music, sports, and movies respectively.

As we all know that huge buttons are easy to collide with, whenever you are playing games, which can suddenly change the audio settings. So, gamers might find this huge button a bit irritating. Even though it has a design which looks very aesthetic, people expect more due to its high price, which is about three hundred bucks.

It has a very unique and distinctive 3D audio mode, which shifts the sound as you move or rotate your head. If you turn your head towards the right side, the sound which had been forward of you will now be playing primarily on the left side of your ear. This makes it the most highlighted feature of this headset. And the best part is that it works amazing, without any difficulty. After this feature, you won’t even remember that you are wearing this headset. So gamers, who want an amazing experience of 3D audio mode while playing games, this has to be in your list.

But if you want to do anything, other than playing games, some problems might appear. Even though we can’t anticipate a gaming headset to be great for movies, or music, but due it the high range of its price we expect it to work well. But unfortunately, it’s a disappointment. So if you are looking for a headset only for the gaming purpose, Acer Predator Galea 500 is a great choice. But if you are looking for a headset to watch movies, and listening to music, Acer Predator Galea 500 might not be a really good choice.

So the pros, or the advantages of Acer Predator Galea 500, is that it is extremely comforting. The second thing that makes it more distinctive than other headsets, is that its 3D audio is great for gaming.

The cons, or we can say the disadvantages of Acer Predator Galea 500, is that it is really expensive. The other thing that is a bit disappointing, is that its remote is easy to accidentally collide. It gives a poor sound performance while watching movies, or listening to music.

Acer Predator Galea 500, is a lot expensive than it should be. Although it has one amazing feature of Waves Nx 3D audio setting, that single feature does not justify its price. It is highly recommended to gamers, whose only motive is to play games and nothing else. But for the people who are looking for more than just gaming, like music and films, that might not be an effective choice at this much cost. So for gamers, it is worth a shot. And for everyone else, it might not be the most suitable choice.