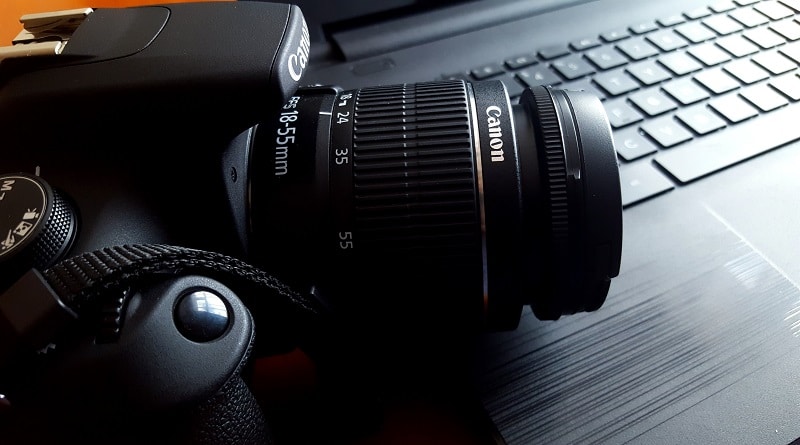 This camera comes with the same design and dimensions as of Canon EOS Rebel SL2. But it has a weight of 449 grams. It has a compact size & long-lasting battery life because of Digic 8 processor. Also, you can control the camera with your smartphone. The camera has a special mic jack, flash sync port for better picture setup.

The camera has a brand-new Canon Digic 8 processor. The camera comes with a 24 Megapixel APS-C CMOS Sensor which captures awesome JPEG images. The camera has Built-in Wireless supports which includes Bluetooth and Wi-Fi connectivity support.

An image processor is an important part of any camera. It is known as the brain of the camera. The camera comes with a Digic 8 Processor which has resulted in enhancements to shooting performance and functionality. It also optimizes the digital lens. The processor provides dual-sensing Image stabilization with the help of the Gyro sensor & CMOS sensor built-in Digic 8 processor.

The processor improves images when at high ISO speeds, increases the speed of autofocus and object detection with more accuracy. This processor also increases the continuous shooting ability of the camera. It also improves JPEG image quality in 4K video and exports them as high-resolution JPEG still images.

The Canon EOS Rebel SL3 camera also has some great software & hardware features. The camera has UHS-I Memory Card Support. The Eye detection feature works well. It does not matter whether the object is near or far, stable or in motion, Eye detection works well. The camera has an Optical (pentamirror) Built-in Viewfinder. The camera has the same previous variants’ 9 points autofocusing archaic system in the viewfinder. But the optical viewfinder isn’t the viewfinder which you were expecting. The camera has an ISO range of 100 – 25,600. But the camera supports only 5 frames per second continuous shooting. The camera has a High Video bit rate of 120mbps. You can use another high-quality lens than the lens comes with a kit for better results in image and video quality. Since the Canon EOS Rebel SL3 is an entry-level DSLR camera, it has limited capacity hardware and software. The crop factor is a big issue while capturing videos in 4K. Also, many features are only for basic use, but you cannot use them in full depth. Also, the camera does not have any image stabilization, has no environment sealing & has only 9 focus points. Moreover, if you are looking for Software Engineer jobs then it could be the best chance to try it

Since the Canon EOS Rebel SL3 camera is compact, it makes it easier to hold with a tight grip. It is a lightweight camera and has a long battery life, a fully rotating screen, a powerful processor, a good amount of software features and 4K support. Though it has a huge crop factor in 4K, you can capture videos in 1080p with less crop factor. These things make the camera a good bundle of features. Also, it is more user-friendly than other cameras. It has a simplified menu, simplified introduction to various features and simplified hardware. So, this camera may be a good option for beginners. But for professionals, Canon EOS Rebel SL3 is a fine DSLR camera but the new mirrorless camera options from Canon is a good choice. The camera comes with a 1-year Canon limited warranty. You can extend the warranty by purchasing an extra warranty from Canon. Canon EOS Rebel SL3 body comes with the price of $599.99 & an extra $100 for a kit lens. So, it will cost you $699.99 for a basic setup of your camera.